Why You Shouldn’t Hate Yoko Ono

One important thing that foreign countries should remember is this: Yoko Ono is not a witch (as other John Lennon fans called her) and so are the other Asian women.

The love affair of John Lennon and Yoko Ono was considered an honor to the Asian countries while to others, it was purely witchcraft. When you visit other sites related to the Beatle, Paul McCartney, John Lennon and controversies about his love affair, the fans have the same comments:

Yoko is not a bitch and definitely not an Asian witch (though she claims she is, releasing a song entitled ‘Yes, I’m a witch”, (not Asian witch) as an ironic reply to those who keep throwing negative comments against her). She is an activist for peace, knowing the fact that she grew up fighting wars. She is an artist and is under a lot of influences and collaborations with other artists and groups. She directed sixteen films and is considered an explorer of conceptual art and performance art. Perhaps her personality as an artist was one of the strong reasons why John Lennon was deeply in love with her that he even wrote a song dedicated to Yoko Ono. Isn’t it possible for both artists fell in love with each other that’s why others can’t understand why John Lennon is into Yoko?

Yoko and John’s former wife, Cynthia, never had a good relationship together. Cynthia once accused of dominating John and enjoying her complete control over him, saying he was into strong women like Yoko. After John’s death, Cynthia Lennon later released a memoir entitled “A Twist of Lennon”.

When Yoko made a speech in an awards night and proudly narrated how John Lennon felt bothered why more artists are covering Paul McCartney’s songs than his, McCartney felt insulted and their relationship got worse. To quote Yoko: “John was very human. In the middle of the night, he would say, ˜They always cover Paul’s songs, they never cover mine’. I said to him “You’re a good songwriter, It’s not June-with-spoon that you write. You’re a good singer too. Most musicians would be a bit nervous about covering your songs.”

I believe Yoko did not mean to insult Paul. It was merely a gentle woman’s way to console her beloved. One thing: I don’t believe that John Lennon was insecure about Paul’s songwriting skills. Just the fact that he thought about the guy late at night before he slept makes it a living testimony of the Beatle’s respect to another Beatle. Another thing: Yoko was not the one to blame why Paul McCartney and John Lennon never recorded together again or why the Beatles broke up. It’s like blaming boy bands why they’re boy bands. Or blaming Lucifer for being evil.  Ask Paul instead of blaming Asians and calling them names just because you hate Yoko.

Some of Yoko Ono’s works (and why you should stop hating her): 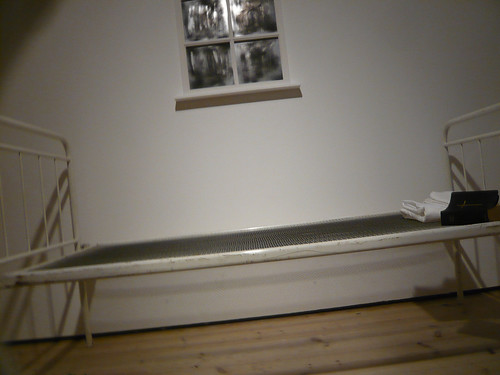 “Painting to Be Slept On” by Yoko Ono.