God Save the Fame

Don’t believe in your Science teacher when she tells you about the stars being ten thousand light years away from the earth. She’s actually lying. Tell her the stars are just a few clicks away. Tell her more about the 1click2fame talent competition so she can have a clear picture of what you are talking about. 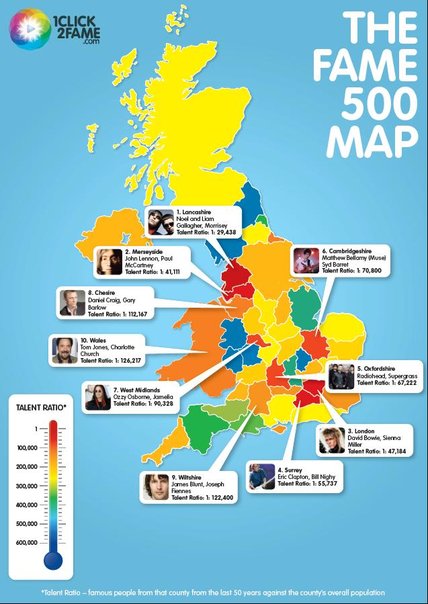 Yes, the next star might be just living in your neighborhood. If you’re from Lancashire, the fame capital of UK, then maybe you should learn a little history about your place. reported by 1ClicktoFame as the hotspot “for producing superstars per capita than anywhere else in the country”. Now, that’s interesting.

Please stop convincing yourself that Ozzy Osbourne is from another universe or John Lennon was from another planet. The FAME100 Talent Map reveals Britain’s hotspots of talented musicians and actors. Every city is represented by celebrities that are highly recognized all over the world. And I’m not just talking about Ozzy here, I’m talking about James Blunt, Leona Lewis, Guy Ritchie, the guys of Duran Duran, Paul McCartney and many more famous stars. Well, what can I say? The United Kingdom is definitely the home of shining stars, not the black outer space.

To continue the legacy, the 1Click2Fame online talent competition is accepting professional performance videos featuring a wide range of talents, from dancing and singing to the most creative performances of artists. It’s an online voting, so it’s important to be friendly in online communities for you to get their votes. The FAME100 Talent Map is the living testimony that UK owns talented individuals.

Imagine this scene- you giving your best shot in front of the camera, uploading the video and then after a few weeks or months, you’re more popular than Ozzy Osbourne. How’s that for a successful career?

Next time, when you are asked if the stars are actually blinking or where the brightest stars really are, tell them they’re all in UK.